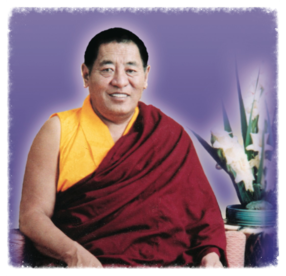 ​H.H. Jigme Phuntsok Rinpoche was born in 1933, the third day of the first month of the year of the Water Bird, in the Golok Sertar region of Kham. He is said to have come out of his mother’s womb in meditation posture, reciting the mantra of Manjushri, “Om a ra pa tsa na dhi” as soon as he was born. (He would later go on to recite this mantra more than 13 billion times in the course of his life.)

At the age of five, His Holiness was recognized as the reincarnation of Tertön Sogyal, and became a monk at Nubzur Gonpa, a branch of Palyul monastery in Sertar. At nine he took ordination from Khenpo Sonam Rinchen of Drakdzong and received the name Thupten Lekshé Zangpo.

Once, when he was fifteen, he was overcome by intense devotion for the Dzogchen teachings and especially for Jamgön Mipham Rinpoche, who appeared to him in a vision, and granted his blessings so that Khen Rinpoche experienced the nature of mind.

From the age of eighteen, he studied with the great Khenpo Thubga Rinpoche at Changma Hermitage in Dzachukha, receiving teachings onMahayoga, Anuyoga and Atiyoga. At twenty-two he received full monastic ordination and at twenty-four he was enthroned as the abbot of Nubzur Monastery, which is a branch of Palyul Monastery. During the time of the Chinese invasion and occupation of Tibet, starting in 1950, His Holiness withdrew increasingly from normal monastic life until in 1959 he took to the remote mountains, herding a small flock of goats and sheep. There, for the next twenty years, he secretly engaged in meditation and occasionally taught small numbers of disciples, often basing his instructions on the Seven Treasures of Longchenpa. Throughout this time, he was able, through legendary exploits and means, to elude the Chinese authorities.

Then, in 1980, he founded Larung Gar in accordance with the prophecy of the First Dodrupchen Rinpoche. It went on to become the largest Buddhist teaching centre in the world. In 1987, His Holiness led hundreds of his disciples from the Institute on a pilgrimage to the sacred mountains of Wu Tai Shanin China's Shaanxi Province. En route in Beijing, he met the Tenth Panchen Lama, Chökyi Gyaltsen, and gave teachings on the Thirty-Seven Practices of the Bodhisattvas to a crowd of over 5,000 people, including Tibetans, Chinese, Mongolians, and other Buddhist practitioners. At Wu Tai Shan, the audience for his teachings swelled to 10,000 on occasions. He also undertook retreats at sacred locations and caves. There are accounts of many extraordinary occurrences during this pilgrimage.

His Holiness made extensive travels across Tibet and China, teaching and revealing terma. In 1990, at the invitation of Kyabjé Penor Rinpoche, he visited India, where he taught at various monasteries, including the Nyingma Institute in Mysore. At Dharamsala, His Holiness Dalai Lama resumed the connections he and His Holiness Jigme Phuntsok Rinpoche had in their previous lives by receiving teachings from His Holiness for two weeks. In the summer of 1993, he visited various Dharma centres in Inida, Bhutan, Hong Kong, Singapore, Malaysia, Taiwan, USA, Canada, and France, including Lerab Ling, where he gave empowerments and teachings including the empowerments of Tertön Sogyal’s termas, Tendrel Nyesel and Vajrakilaya, as well as his own terma treasures of Manjushri and Vajrakilaya, and Dzogchen teachings.

At the age of 71, on the fifteenth day of the eleventh Tibetan month, of the Water Sheep year (7th January 2004), he passed into parinirvanawhile seated in the posture of meditation.​